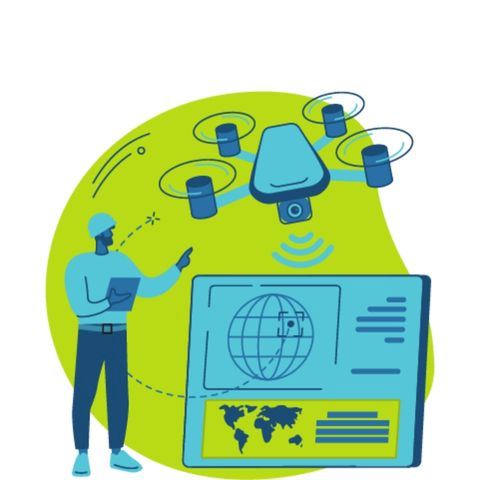 Defence tech trends to look out for in 2023

More than ever before, technology companies are being called on to use their expertise to tackle modern security challenges.  As threats become more technologically advanced, security services are rethinking their traditional procurement policies, and increasingly looking to smaller tech “disruptors” to get back ahead of these developments.

We’re taking a look at just a few of the biggest defence tech trends from the last year, and how they might develop further in 2023 and beyond.

AI and Machine Learning has existed as a field of research for decades, with many of modern techniques originating in the 1960s – but it wasn’t until the 21st Century that computing power increased to allow researchers to fully test and develop these early theories.

Despite being a relatively new technology, however, 2022 saw AI become omnipresent throughout the defence industry – a feature which is only going to increase as the technology becomes smarter and faster.

Already, AI is present in every aspect of defence, from planning and training, to in the field.  But it is in defensive technologies where AI is now fully integrated.  AI defence systems, using huge data sets and integrating with a large array of sensors, are able to independently differentiate between a threat and non-hostile actor.

Currently, in most defensive systems, human operators retain control over the use of kinetic effectors.  Looking ahead, however, as the threats become smarter and more agile, the role of AI will take greater prominence until the human operator is side-lined altogether because they are too slow.

Coinciding with the increased power of AI, drones of all shapes and sizes are playing an increasingly large role within the military.  Improved surveillance and defence drones continue to be released, while interceptor drones (drones to disable hostile drones) were also launched for the first time in 2022.  An alternative to traditional defence projectile, these carry no explosive, so can be used in populated areas, can disable multiple smaller drones on one launch and can return to a launch-base to be used again in the future.

We have also witnessed the miniaturisation of drones, that can swarm and overwhelm traditional air defence systems.

As the invasion of Ukraine has demonstrated, drone warfare, is only going to come into greater prominence in the coming years.  This war has also brought to the public consciousness just how simple it is to load an explosive device onto a civilian drone and turn it into a weapon.  Security services are increasingly aware of this threat, and in 2023 and beyond, the race to get ahead of these drones will become increasingly competitive.

As with all other public and private organisations, the defence sector is grappling with how to reduce its greenhouse gas emissions to meet the UK Government’s commitment to be net zero by 2050, without undermining its combat readiness.

The process of digitisation is providing some quick wins for the armed forces, allowing companies to design, test and optimise systems with a much smaller environmental footprint than traditional live testing and evaluation.  Additionally, the process of simulation is enabling soldiers to rehearse and sharpen their skills without stepping foot in a plane or tank, for example.

Green and renewable solutions, already being honed in civil applications, are moving into defence.  For example, electric vehicles, energy generation and storage batteries. Defence customers can cherry pick the best and adapt them to their needs.

Looking ahead, as militaries further integrate the latest technologies into forward deployments – including AI, autonomous vehicles, quantum computing and quantum sensing –the demand for processing power and electricity consumption will greatly increase.  Offsetting this, with systems such as edge computing, where processing is done in the field rather than transmitting large amounts of data back to a central hub, will become increasingly prominent, as will the development of “frugal” AI, which uses processing power more efficiently.

All these dramatic technological advancements, make effective communication skills all the more important.  To be a thought leader in this space, it’s important to demonstrate, why your approach is unique and how you can make a difference to defensive applications.

Making complex systems easy to understand, and placing them in front of the critical decision makers, is what Clear B2B has been doing for defence organisations since its inception.

If you’re looking to revitalise your PR strategy in 2023, and need an agency that understands your industry, get in contact with Rachel Arquati to find out how the Clear B2B team can help you.

There’s nothing more motivating than getting recognition for a job well done! Appreciation has long been linked to higher job satisfaction, and in the current climate where competition for talent is continuing to escalate, it’s more important than ever that employees feel appreciated and valued.

Are you an energetic ambitious executive or manager, full of ideas, good with copywriting, great with people and supremely organised? So how about becoming part of our award-winning team working with some big brand accounts?

As we begin the new year, 2023 marketing plans are already underway. There are always new trends and activities being trialed, but have you taken a moment to consider the big bankers you can no longer afford to ignore?

As a marketing medium, video content is becoming increasingly popular across all platforms.