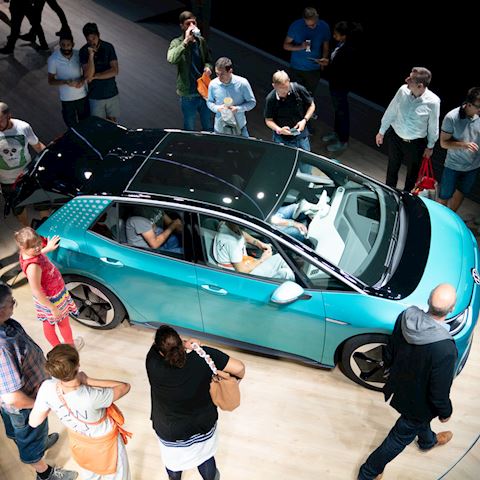 Frankfurt Round up – Clear’s top picks

One of the most important events in the automotive calendar, the 2019 Frankfurt Motor Show, has drawn to a close. Naturally, electronification has been a major topic of conversation. It’s been a busy couple of weeks in the German city, full of jaw-dropping vehicles and marvellous displays of technology. However, it has not come without its share of controversy. We’ve rounded up some of Clear’s top picks.

One release that has got a lot of attention has been the Volkswagen ID.3, the first all-electric supermini from the brand. With VW still seen to be playing catchup to the industry (notably since the 2015 emissions scandal), the car is a major steppingstone in not just VW’s road to electrification, but the whole VW group. The ID.3 will eventually underpin all EV models across the group, including Seat, Skoda and Audi.

The hero-edition has a 203hp electric motor that VW claims will have a range of between 143-205 miles, but longer-range versions are also expected. The car will likely cost around £25,000.

From one German brand to another, Porsche launched their highly anticipated all-electric luxury model at Frankfurt with two versions, the Taycan Turbo and the Taycan Turbo S. These models are set to rival the increasingly popular Tesla Model S. With a 93.4kWh battery, the Turbo S will kick out a whopping 750hp – extremely impressive for a 4-door luxury saloon. Porsche claims the range will be a maximum of 279 miles.

Aside from the performance and battery technology, the interior is loaded with tech. A huge, curving 16.8-inch touch screen sits behind the steering wheel with a further two screens on the centre of the dashboard (10.9 inches) and the centre console (8.4 inches) allow the driver to change car and entertainment settings with iPhone-like haptics. If you feel like there still aren’t enough screens, an infotainment screen for your passenger is an optional extra.

After being in production for what seemed like forever and conquering treacherous terrain in even the furthest corners of the Earth, the previous generation of the British icon was discontinued in 2016, but thankfully, Land Rover has brought it back with an all-new design. Land Rover claim testing put numerous cars through collective million-plus miles to ensure it was worthy of wearing the Defender badge.

The car was one of the few to be launched at Frankfurt without a hybrid option, but Land Rover say a mild hybrid and a plug-in hybrid version will be available in coming years. With the new design and luxurious details that would rival even top-end Range Rovers, the car has split opinions for journalists and car fans alike. However, Lego has already released a ‘technic’ version, so it must be doing something right…

Not just about the cars…

Aside from the glossy new releases and impressive technologies, a lot of interesting topics have surrounded the show, namely the future of the show itself. With fewer manufacturers and less space used, many are predicting the downfall of the show. Huge brands like Toyota, Nissan, Volvo, Citroen, Bentley and Rolls Royce did not attend despite releasing new models recently.

Bernhard Mattes, the chief of VDA (the body that organizes the show), has reportedly refused to commit to a return to the city and has hinted that a fresh concept should be agreed on. Mattes resigned on the opening day of the show.

Alongside this, climate protests have taken place causing disruption to the show and Frankfurt itself. Activists claim that despite the massive focus on EVs, not enough is being done and that the large German manufacturers are still playing catchup.

Do you face a challenge in the automotive world that needs solving? Get in touch Chris Wall, one of our automotive specialists, to find out how we can help you.

At Clear B2B we love awards. But not just for the kudos. Entering awards changes how we address projects and puts into place excellent working practices to achieve success for clients.

Clear B2B looks at how to ensure an effective communications strategy to reach and influence key specifier audiences.

We are looking to recruit an Account Executive to join our busy PR and marketing team here at the head office in Poulton.